As the 2019 general elections are just around the corner, almost all youths in Nigeria and lovers of the #NotToYoungToRun and #TakeItBack movements are talking about one man and that’s Omoyele Sowore.

Sowore is one of the candidates for the 2019 presidential elections in Nigeria. He is also a journalist, blogger, businessman and human rights activist in Nigeria.

In this article, we’ll take a look at the life of this presidential candidate from his early life to his wife, career, presidential ambition, networth, political party and lots more. Sowore was born on the on the 16th of February 1971 in his hometown. He hails from Ese-Odo, Ondo State in South Western Nigeria.

This man was born into a polygamous family and is the first child of 20 children which includes his brothers and sisters. While growing up as a young boy, he combined subsistence fishing with his education in order to assist his parents in catering for the family.

Sowore developed the love for journalism and the media during the days of the Nigerian military style of government. According to him, he saw the media as the strongest tool he could use to criticize the government as at that time because he believed that they weren’t ruling as the masses would have loved.

Shortly after his secondary school education, he moved to Lagos(in Nigeria) to study at the prestigious University of Lagos for his tertiary education. Young Sowore Leading A Protest In 1999

In 1999, he suffered a very brutal attack by members of a particular cult group in his university(UNILAG). After he was attacked by these cultists, he was left with no other option than to travel outside the shores of Nigeria for treatments and to prevent further attacks that can cost him his life.

He traveled to the United States of America and there he started the now prominent online news platform, Sahara Reporters. He also continued his various criticisms on the bad government which Nigeria had then, on this new online platform.

Fast-forward to 2009, Omoyele Sowore’s Sahara Reporters became an international household name as it was the first news website to identify and publish the photo of Umar Farouk Abdulmutallab who attempted to detonate a bomb aboard a flight in the USA. He(the bomber) is popularly referred to as the Underwear Bomber, you might as well know this story. Omoyele Sowore is a completely educated man. He studied Geography and Regional Planning at the University of Lagos(UNILAG) from 1989 to 1995.

His academic program was however extended by two extra years after he was expelled twice for political and student activism in the school.

He was the also the President of the University of Lagos Student Union Government(UNILAG SUG) between the year 1992 and 1994 where he was greatly involved in various anti-cultism and anti-corruption activities.

After graduating from the University of Lagos where he studied for 6 years(because of reasons mentioned above), Sowore traveled to the United States to further his education where he obtained a masters degree in Public Administration from Columbia University.

So Omoyele Sowore currently holds a B.Sc. degree from the University of Lagos(UNILAG) and an M.Sc. degree, from Columbia University in the United States of America.

Sometime in 2018, Omoyele Sowore declared his intention to contest for the 2019 presidential elections. According to him, Nigerians are tired of recycling old cargoes in the nations’ highest seat of leadership – The presidential seat.

During this time, he launched the #TakeItBack movement on various social media networks and other offline mediums. Sowore also believes that his major opponents, President Muhammadu Buhari is useless, and Alhaji Atiku Abubakar is a corrupt man and Nigerians don’t deserve these kinds of men in government.

Sowore also launched his own political party which is known as African Action Congress – AAC which he is also the presidential candidate for.

His campaign so far has been successful and he has also managed to get the attention and followership base he needs to increase his chances of winning the presidential election.

Although Omoyele Sowore wife and children are reportedly unknown, we believe that he is married and his marriage is blessed with beautiful kids who are also based in the USA. However, we do not have an accurate figure on the number of kids he has or the name and biography of his wife.

Sowore has chosen to exclude his family, wife, and kids from his political ambitions and campaigns so they don’t get involved in various controversies which might arise during any of these events in the country.

UPDATE: The identity of Omoyele Sowore’s wife has been revealed on an article on SaharaReporters website.

Her real name is OPEYEMI SOWORE. You can watch a video of her criticizing the unlawful detention of her husband by the Nigerian government below. 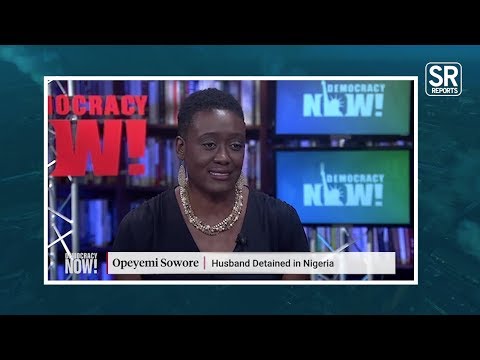 Sowore is a businessman with many successful offline and online investments which are said to be completely based in the USA.

We do not have an accurate value of Omoyele Sowore networth as he prefers to keep his investments private and they are completely based in the united states of America.

However, Sowore’s website(Saharareporters) is said to worth approximately $10 million(3.5 Billion Naira) and this is his major investment and source of income.

According to various online sources, Sahara Reporters is currently funded by a group of various multinational organizations. These organizations regularly pump a significant amount of money into the platform in a bid to assist it in its quest for investigative journalism.

Like other popular activists and businessmen in Nigeria, Sowore has also been faced with various controversies ever since his days at the University of Lagos up till today.

Sowore has also been disgraced on some occasions of his presidential campaign. One of those was when he visited the Ooni of Ife, Oba Ogunwusi, sometime in 2018 without prior information about his visit. He and his campaign team were reportedly beaten up by the guards at the palace before the Ooni eventually intervened in the matter.

Another of such occasions was when he came to Lagos for a meeting. Sowore was arrested after speaking to the youths at Shoprite but was later released that night.

Many believe that he was arrested for no reason other than selfish political interests.

Some people also accused Sowore of using his news platform(Sahara reporters) to promote and extort money from various politicians in Nigeria but he has since denied these allegations.

Other popular controversies were when he as accused of using Sahara Reporters to ridicule former President Goodluck Jonathan in the 2015 polls and when he allegedly accused Senator Dino Melaye of not attending ABU Zaria. Below are answers to various frequently asked questions about Omoyele Sowore in Nigeria and outside the country.

Q1. What Is Omoyele Sowore Wife Name? – Like is said earlier in this article, Sowore has so far chosen to keep the names of his wife and children private due to some reasons which is currently unknown to us.

Have some information on this? Drop them in the comment section and we’ll include it here when we verify the information is true.

Q2. Is Sowore Married? – We believe that Omoyele is married and blessed which kids who are based in the USA.

Q3. What Is Omoyele Sowore Net Worth? – Sowore is reported to worth around $10 million and 3.5 Billion Naira when converted to Naira.

Q4. What Is Omoyele Sowore Age? – Sowore was born on the 16th of February 1971, and he is 47 years as at the time of compiling this article.

Q5. Is Sowore Running For President? – Yes, he is.

I hope this post has answered your question if you were searching for answers to questions like Omoyele Sowore biography, wife, children, political party or/and networth. 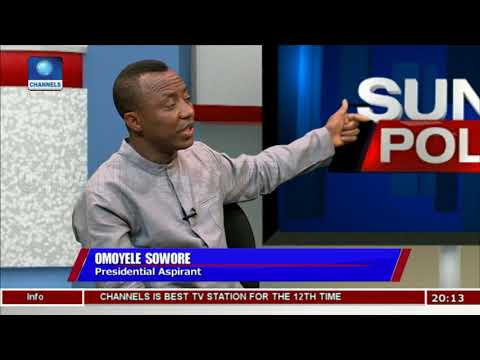